LAKE MOSES – There might not be a happier time than right now for gardeners, who are reaping the harvest fruits of their garden as summer turns into fall.

Lacey Jensen and her husband, Darrel Jensen, have for years cultivated a large garden in their backyard in Moses Lake. Lacey Jensen reflected on this year’s harvest, what went well, and what new things she’s first tried this growing season.

Jensen said they grew just about anything they could in their garden.

“This year we’ve made corn, sunflowers, tomatoes, a lot of different peppers, squash, zucchini,” Jensen said. “I have melons, cantaloupe, vines, a mulberry tree and a peach tree that we have never had luck with.”

Jensen recently said they had too many vegetables coming to know what to do with them, packing boxes full of produce to give to neighbors or take to the office for coworkers to take. She said she pulls out tomatoes, peppers, squash and zucchini almost every day, with a good-sized basket of each every three or four days.

Even after bringing a load of squash and zucchini to his colleagues, Jensen said his plants have been recharged with more to pick.

Jensen said all of his tomatoes have done very well this year, with a great variety growing in his garden. This was her first year growing tomatillos, but she said green tomatoes are doing very well and are still producing.

“The plants looked a little sad during the heat wave, but they didn’t stop and now they’re charged,” Jensen said. “They turned into giant bushes and I chopped them all down a few weeks ago and they’re still crazy.”

While many gardeners lost a good chunk of their garden to the absurd heat wave in June, Jensen said her husband constantly watered their plants, went out at night before bed and left at dawn.

She said that crazy dedication paid off. Eggplants, zucchini and Japanese squash have also performed well this year, Jensen said. She said she only grew a single zucchini and squash plant, but saw both grow to huge heights this summer.

The sunflowers were all leftovers from voluntary departures from the last growing season, she said. Although they started out on their own, she said they had done very well despite the relentless heat. Jensen said they never intend to bring things back every year as they try to revamp the garden every spring.

As harvest time has passed for strawberries, which typically grow in the spring and early summer, Jensen said she still has a few plants that are hanging on and setting berries every few days.

“They don’t normally do that,” Jensen said. “In the spring my daughter normally goes out and chooses her own bowl every morning and it’s her breakfast in the spring when they grow up.”

The pepper plants, including bell peppers, jalapeños and banana peppers, have all done surprisingly well this summer, Jensen said. She said it was probably the best year they had with peppers and that she wasn’t sure if it was because of the black plastic she and her husband had laid out under the rows this year to minimize weeds.

“We made rows and covered our rows with plastic mounds and we didn’t put plastic everywhere, just above the rows,” Jensen said. “It seems to help a lot, there are still some weeds, but it was a lot more manageable.”

While the plastic coating helped keep weeds out a bit, Jensen said she thinks the plastic may have kept her carrots from sprouting this year. She said carrots are usually harvested around this time, but worries they may not have received enough sunlight through the plastic coating.

While the corn performed well this summer, Jensen said birds consumed most of it before she had a chance to harvest. Luckily, she said they usually leave the stems anyway to use as decoration in the fall and Halloween.

Having an abundance of produce at the end of the growing season is a great feeling, she said.

“It’s really nice to be able to take a box of vegetables to work and let people take them or give them to your neighbor when you know they haven’t grown anything this year and have four children,” Jensen said.

Knowing where your food comes from is a nice bonus to have. Jensen had a baby in December and said she was able to prepare baby food for her newborn.

Jensen said she had to thank her husband for helping to start the garden in the spring around Mother’s Day while she was busy at home with her newborn baby. In their first year at home, Jensen said their garden was about three times the size of this summer’s.

But, she said it was overwhelming and just too much to handle. When the garden is a more manageable size, she said it stays nice until the cold weather arrives.

“We got an abundance of veg out of it, but it’s also an abundance of weeds and work,” Jensen said. “You’re out there everyday and when it’s like that, you give up at this time of year.” 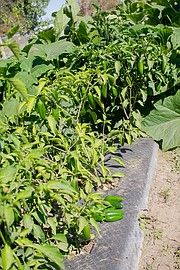